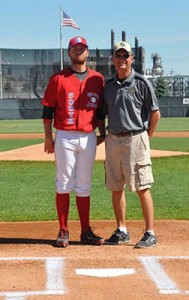 Conner Hasecuster got to wear his Shelbyville High School baseball uniform one more time Sunday in the finale of the North-South All-Star Game.

Hasecuster, who will play baseball at the University of Evansville, went 0-for-3 in the wood bat game of the three-game series played at Oil City Stadium in Whiting, Indiana.

“It was beautiful,” said Hasecuster of the stadium used for high school and college games. “It’s one of the best fields I’ve played on. It looked like a minor league field. There were no bad hops on it.”

And that’s high praise from a shortstop.

Hasecuster finished 2-for-8 in the all-star games with a walk, a stolen base, a run scored and a run batted in.

Hasecuster and Hamilton Southeastern’s Matt Gorski shared the shortstop duties for the South.

Gorski started game one — a 7-6 win for the South. Hasecuster came off the bench to go 1-for-3 with a run scored.

“(The coaches) did a good job of each guy getting about 3 at bats (each game) and 4-5 innings in the field,” said Hasecuster.

Hasecuster’s only start came in game two — a 15-2 rout of the North.

“We really put the bat on the ball in game two,” he said. The South finished with 15 hits to finish the Saturday sweep.

Hasecuster was 1-for-2 with a walk and an RBI. He also had two fielding assists.

The South used a three-run top of the ninth inning to complete the series sweep Sunday with a 6-2 victory.

Hasecuster was 0-for-3 with the wooden bats.

“It’s different how the ball comes off the bat,” said Hasecuster in the game where each player wore his high school uniform. “If you hit it square, it’s about the same. But if you don’t, your hands sting for awhile.”

There is one more weekend of travel baseball on Hasecuster’s schedule before he fully concentrates on his trip to Evansville.

His anticipated move-in date is Aug. 20.